Beginning in 2014, The Jesuit Dallas Museum set out to curate and attract exhibitions which enhance the mission of the Museum and increase the institution’s standing in the community as well as engage with local artists. One of the most noteworthy and powerful was Ground Zero 360, a national, traveling September 11thMemorial exhibition featuring original photography, relics, and survivors’ stories. September 10 – November 25, 2015

Laura Roosevelt, President Franklin D. and Eleanor Roosevelt’s , great-granddaughter specializes in abstract mixed media painting. Laura Roosevelt’s passion for history has pioneered a new form of American art with her “Historic American Pop” series. These pieces incorporate iconic photographs with textured, abstract backgrounds, reshaping the experience of those moments frozen in time. The exhibit “Historic American Pop- A Collaborated Historical Perspective of Abstract Art and the Words of Eleanor and Franklin Roosevelt” featured Roosevelt’s art with famous quotes from Eleanor and Franklin D. Roosevelt chosen by her sister Elizabeth Roosevelt Kelly and their late great-aunt Chandler Roosevelt Lindsley. Laura received her BA in Studio Art and Art History from Dennison University and her MA from NYU. Her pieces are in numerous private collections. Recent exhibitions include The Art of The Roosevelts: FDR Hyde Park NY, The Aspen Institute Coordinating Exhibition with Ken Burn’s symposium, Pearl Harbor: A Day That Will Live in Infamy, and Gensler Architecture: Abstract Pallets

Bill DeOre shared the Dallas Morning newsroom with author Mark McDonald, while both also served as volunteer coaches in youth sports. It follows then, that the “seasoned” duo would once again connect on a project related to … what else … sports history. Mark McDonald’s book Beyond The Big Shootout, takes a trip through that 1969 epic of a football game between the University of Arkansas and Texas, which was a heartbreaking 15-14 loss on national TV that was attended by President Richard Nixon and covered by newspapers from coast to coast. The exhibition included Bill’s illustrations from the book, as well as other works from the Jesuit Dallas Museum collection. 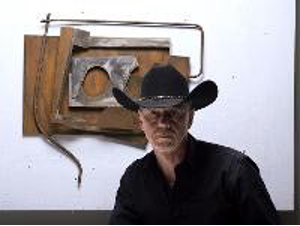 Italian artist and sculptor, Alex Corno’s exhibition, included sculpture and works on paper. Corno creates abstract forms using welded iron and stainless steel. After receiving  his diploma in Sculpture from the Academy of Brera in Milan in 1982, he taught in the public schools of Milan for several years.  numerous shows in both Italy and abroad.  Alex Corno states that regarding his work that, “God is in the details.” All works included in the exhibition were on loan from Valley House

Alumni artist, Stuth-Wade exhibited  landscape paintings, watercolors, and drawings  Proctor,Sulphur Springs Fish Camp on the Colorado River, Big Bend   His self-directed art education began under his mentor, Dallas artist, Perry Nichols, when Bob was still at student at Jesuit Dallas.  All works included in the exhibition were on loan from Valley House Gallery. 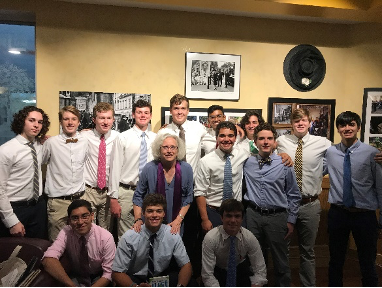 Award winning photographer, Gail has traveled the world photographing people and their diverse cultures. She is motivated to communicate visually and show people in their own environment. She captures their attitudes, expressions “Inspiration, for me, is being in the moment. As one of the few woman photographers of my era, I have worked professionally for 45 years, (24/7), and have learned that experience is the best teacher, and attention to detail sets me apart. I have been told my work looks effortless, and Michelangelo said it best, “If people knew how hard I have had to work to gain my mastery, it wouldn’t seem wonderful at all.”

A graduate of the prestigious Rochester Institute of Technology, Gail spent more than 14 years with Gittings Portrait Studio in Dallas, TX  where she learned to capture the extraordinary in ordinary people. Gail earned the degrees of Master of Photography in 1981 and Photographic Craftsman in 1996 from Professional Photographers of America (PPA). Gail Nogle is also the mother of Jesuit graduate, Harold B Nogle lll ’02. 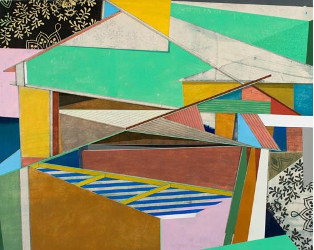 As part of Jesuit’s 75th Anniversary celebration, The JDM celebrated the work of Alumni artist, David Collins ’84 in conjunction with David Collins’ exhibition, Day Shift at Valley House Gallery. He earned a BFA in painting from theRhode Island School of Design. He is a two-time recipient of the Yaddo Fellowship. His work has been featured in The New York Times and Dallas Art News and is in several private and corporate collections. All works included in the exhibition were on loan from Valley House Gallery. 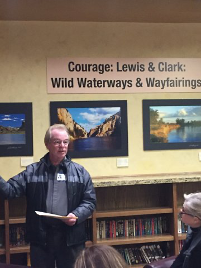 In 1804, with instructions from President Thomas Jefferson, Meriwether Lewis and William Clark set out from St. Louis on their transcontinental journey of exploration. Dr. David Ranney is a landscape and wildlife photographer who grew up near the Lewis and Clark Trail on the Missouri River in Yankton, South Dakota. Dr. Ranney’s photography has taken him to 45 countries and all of the world’s continents. He is best known for images of our country’s historic western trails, including the Lewis and Clark, Oregon and Santa Fe. The exhibition featured photographs of the Expedition trail as well as works from the Jesuit Dallas Museum collection.

To celebrate the 75th Anniversary of the school, two important alumni artists were featured. Jared Moossy is an established photographer worked in war torn and impoverished countries, and was Director of Photography on the HBO series Witness. He is an advocate for human rights  Moossy has used his art of photography and cinematography to capture human suffering in its purest form. He has risked his life, time and time again, to tell stories. He has traveled the world, and through his evocative images given voice to people who have been silenced. Brooks Oliver’06 received his BFA from SMU and his MFA from Penn State. He  was a Fellow at the internationally renowned Archie Bay Foundation in Helena, Montana. Recently he has been teaching with West Virginia University's Ceramics program in Jingdezhen, China. Mr. Oliver was awarded the distinction of being named a 2017 Emerging Artist by the National Council of the Education of the Ceramic Arts. He is currently a lecturer in Ceramics at UNT College of Visual Arts & Design. 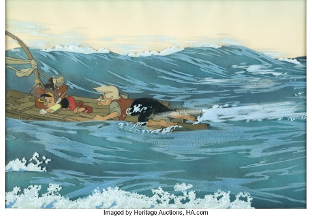 Walt Disney was known as an artistic visionary.  This exclusive exhibition included more than 55 drawings, artwork and original cells, from such classic Disney animated films as Pinocchio, Peter Pan, Fantasia, Sleeping Beauty and Snow White. All works included in the exhibition were loan from a private collector.

A man with a truly global heritage, Johannes Boekhoudt is known internationally for his ability to transmit emotion and marry artistic talent with thoughtful commentary. A Dutch Caribbean Abstract Expressionist, social injustice imbues Johannes Boekhoudt’s paintings. Johannes is continuously stirred by the world around him; he evaluates societal circumstances he has experienced—some troubling or disturbing, some joyful or mysterious. “I paint our current reality with true responsibility. I utilize the painting to denounce cases of domestic violence, human trafficking, human rights, youth rights, abandonment of the helpless (children and elderly), and irrational violence.” media on canvas. “I paint our current reality with true responsibility.” 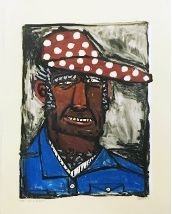 The Presence of God, March 20 – July 18, 2016
God's presence carries a wide range of meaning and can be seen in several of the works of John Doyle, The Spirit’s House, R. C. Gorman, Carol’s Blanket, E. Vermeulen, The Hermit’s Last Confession, the landscapes of Daniel Kendrick and others.

The Ground Zero 360, September 10 – November 25, 2015
This exhibition paid tribute to the victims of September 11th. Ground Zero 360 exhibit creators Nicola McClean, an Irish photojournalist, and Paul McCormack, former commanding officer of the 41st precinct of the New York City Police Department, conveyed the chaos, courage and emotions of September 11, 2001 through paintings, photographs, steel pieces from the World Trade center as well as artifacts on loan from the families of first-responders. More than 2,500 people visited the exhibition. Alex Motter ‘16 interviewed and produced three excellent articles for the Roundup on the exhibition and was invited to New York by the Ground Zero 360 group. History was brought to life for our students and this exhibition exemplified the mission of the Jesuit Dallas Museum to enhance the educational experience of students and the broader community through awareness, appreciation, and passion for art. www.groundzero360.org

Insider’s View, Works by Bill DeOre’ 65, November 7, 2015 – January 29, 2016
Terry Center, 3rd Fl. This exhibition celebrated the 50th reunion of the class of 1965 and the exhibition offered participants an opportunity to share and uncover layers of identity, history, politics, and humor. Bill DeOre’s career spanned thirty-four years as artist, art director, and, editorial and sports cartoonist for The Dallas Morning News. His cartoon work was nationally syndicated. Bill is an old school illustrator – he uses pen, pencil and watercolor, and doesn’t work on the computer. Bill was raised in Dallas and received his Bachelors of Advertising in Art and Design from Texas Tech University. He was a member of the American Association of Editorial Cartoonists. Bill’s awards include the Fischetti Award for outstanding cartoon on a national level, ten Katie Awards for outstanding cartoon in a five state region, Texas School Bell Award and the national Small Business. Today Bill works as a free-lance artist in Dallas, Texas.

A Tribute to Picasso, November 5 – December 15, 2016
The student’s art exhibition during the theater production of Picasso at the Lapin Agile was inspired by a selection of the Museum’s cubist works including Hommage to J.S. Bach, 1950-59, ,George Tesson, Composition with Figures, 1925, Gaston Tutin, and Vigil Veloy,Christo Para Nosotros.

The purpose of this exhibition was to highlight the acquisition of the George Braque, Hommage to J.S. Bach and it coincided with the school’s production of the play Amadeus. The exhibition included a selection of works from the permanent collection, and student and faculty artwork. All works depicted the theme of music.